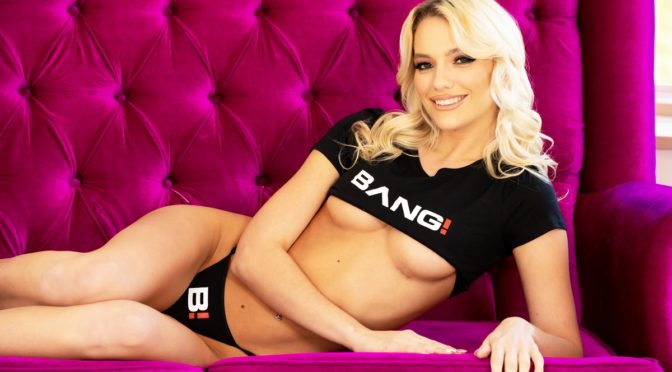 FOR IMMEDIATE RELEASE – April 20, 2021 – Cyberspace — Adult powerhouse BANG! (www.bang.com) is thrilled to announce the release of their 1000th scene featuring their April BANG! Babe of the Month, Kenna James.

“BANG! is so proud to be releasing our 1000th scene today. We have an amazing team of people who work so well together, and without each person’s dedication and hard work, we would not have made it to this point. We also work with the best talent and pride ourselves on providing the highest quality content for our members. We know everyone will enjoy our 1000th scene featuring Kenna, who delivered a memorable, action-packed scene,” said Steve, BANG! Chief Marketing Officer.
.

“Being the Babe of the Month for April has been sooooo amazing! I love representing such an amazing brand that really cares about their product and their talent. Being the 1000th scene released on BANG! is an honor, and I know everyone is going to love it!” said Kenna James.

Bang.com offers its members full access to a library of more than 100,000 scenes, including all exclusive BANG! Originals and unlimited streaming and downloads, custom playlists, and recommendations in a clean, ad-free environment optimized for all devices. BANG! Originals capture every detail with 4K cameras giving the viewer extreme close-ups and a crisp view of the action.

Follow all the latest news and updates from Bang.com through social media on Twitter @bang_twts, on Instagram @bang_com_, on Snapchat at BangOfficial, on YouTube https://www.youtube.com/bangbts, and on the BANG! Blog at bang.com/blog. Visit Bang.com to see all of the BANG! Original Series and exclusive content.