‘Dicks with Don’ features senior Nalpac buyer, Don Zerilli with his sixteen years of industry experience, breaking down the top items retailers and consumers need to buy and what they should stay away from. The second webisode of ‘Dicks with Don’ features Kristen from Doc Johnson talking about their new additions to ‘The D Collection’ and their wildly popular new line Main Squeeze Girls Of Social Media.

“I was excited to have Kristen from Doc Johnson in to shoot the second episode of ‘Dicks with Don” here in Detroit. There has been a lot of buzz about the Doc Johnson Main Squeeze Girls Of Social Media Collection, and this is a great way for everyone to learn a little bit more about the products in a fun and playful way.“ said Don Zerilli, Nalpac senior buyer and star of Dicks with Don.

The second ‘Dicks with Don’ webisode features items from Doc Johnson including the Main Squeeze Girls Of Social Media and the newest addition to The D Collection, Fat D. The Main Squeeze Girls Of Social Media including @viking.barbie, @brittanya187, and @ana.lorde. Wildly popular ‘The D’ by Doc Johnson collection has added some girthy new dildo’s called the ‘Fat D’ available in both six and eight inches in vanilla, caramel, and chocolate. The ‘Fat D’ is available in two types of Doc Johnson materials the soft ULTRASKYN and in the denser FIRMSKYN.

“We are continuing to have a great time with this web series. I was a little nervous after we released the very first episode of “Dicks with Don” but almost immediately I started getting calls from manufacturers, customers, and industry colleagues expressing how much they loved the webisode and concept. We added some fun trivia and fresh graphics to this video for some good laughs” said Amy Lazzara, Nalpac creative director.

Nalpac customers can now place orders using the Nalpac Mobile app or by contacting their Nalpac sales rep with any questions. New Nalpac customers can email sales@naplac.com to get an account set up. To sign up for the Nalpac email newsletter and take advantage of significant savings, special promotions, and sales, please visit the redesigned Nalpac blog at www.nalpac.us. 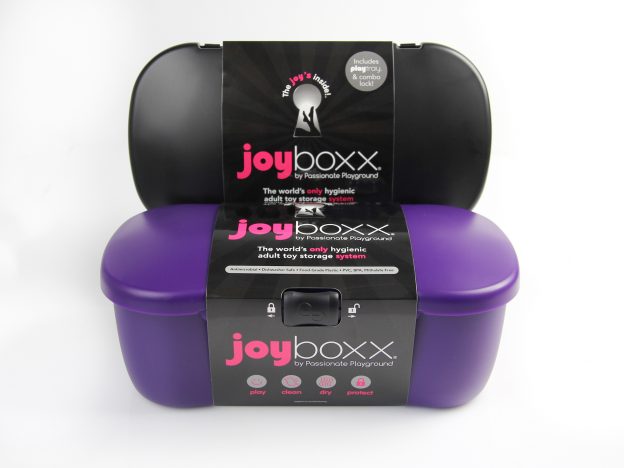 FOR IMMEDIATE RELEASE – June 28, 2016 – Seattle, WA – Passionate Playground (www.joyboxx.com) is excited to announce Joyboxx version 1.5 by the company’s new award winning designer, Brian Conner. Joyboxx + Playtray is the world’s only patent-pending, hygienic adult toy storage system designed to handle products, before, during and after use.

Brian has designed and directed in some of the best agencies in Europe and the US. Honing his skills at Ford Motor Company in his college career, he moved to Germany, where he designed rail vehicles for world markets and product branding for JBL and Native Instruments to name a few. Throughout his career Brian has won many IDEA, Gold, IF, and Red Dot Design Awards and has spent the last few years on the west coast designing and directing for some of the world’s most demanding clients.

Bringing his experience to Passionate Playground is a natural extension of Brian’s design ethos. “Design is about making the world better by intervening through objects. By promoting sexual health and responsible partying, the new Joyboxx line of products will have something for passions of all persuasions.” In his spare time, Brian is also a talented and passionate guitar player.

“We are both lucky and thrilled to have Brian on board our team! Our design meetings are fun and sometimes include a music jam session,” said Joyboxx inventor and Passionate Playground Founder, Deborah Semer.

The Joyboxx improvements were based on customer feedback and do not affect the appearance of the patent-pending hygienic sex toy storage system. The first Joyboxx improvement strengthens the top lid’s “easy-access” compartment that was designed to hold batteries, condoms, cords and other small items.

The second improvement is to the Playtray’s end ribs, which have been extended slightly so smaller sex toys won’t slip as off during transport and larger sex toys will benefit from even greater air flow during drying.

The third improvement is the sleek black packaging that features a larger keyhole and Joyboxx logo in a design that really pops from the retail shelf. The new Joyboxx is available to wholesalers later this week in the black with purple slider or purple with black slider combo, and a limited number of the black with black slider for select partners. Joyboxx retails for $34.99 in the US and slighter higher in other countries.

About PASSIONATE PLAYGROUND Passionate Playground is a Seattle, WA based company founded by Deborah Semer who is proving that sometimes thinking “inside the box” can be revolutionary. Passionate Playground is dedicated to shaping the future of health and wellness by innovating body safe products for passionate people. Passionate Playground’s first two products Joyboxx® and Playtray™ – are the only hygienic adult toy storage system on the market today that protect sex toys, people and furniture before, during and after sexual play. Joyboxx has been nominated for five industry Awards.