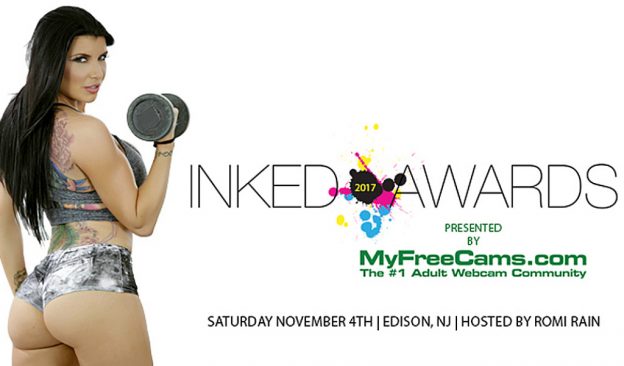 FOR IMMEDIATE RELEASE – November 3, 2017 – Edison, NJ – Inked Angels 6th annual Inked Awards (www.inkedawards.net) will take place this Saturday at the Pines Manor in Edison NJ, honoring the top inked performers in the industry. The 2017 Inked Awards will be hosted by superstar Romi Rain and presented by MyFreeCams.

The Inked Awards will be honoring the top inked performers in categories like Cam Girl of the Year, Studio of the Year, Social Media Queen and Best Ink. Draven Star will be the MC again this year with trophy girls Leigh Raven, Olivia Black and Catherine Tayler. The festivities kick off on Saturday with the Purple Carpet opening at 7:30pm and the Inked Awards starting at 9:30pm. There will be complimentary hors d’oeuvres and a limited open bar before showtime from 7:30-9:30pm.

The 2017 Inked Awards will be streamed live on the Inked Awards twitter @inkedawards for everyone to watch starting around showtime. There will also be photos from the purple carpet and show highlights posted along with some special surprises.

“We are really looking forward to tomorrow night” said Jason Jones, Inked Angels Owner. “We have elevated the event this year with a new location and Romi as our host. Each year just keeps getting better and we are expecting a great show and turn-out for the 2017 Inked Awards.”

“I am so excited to be hosting the Inked Awards this year! Inked Angels has always treated me so well throughout my career and I am honored to be a part of the show!” said Romi Rain, Host. “We have all been working together and talking about how we can make the show this year the best yet and I can’t wait to see everyone there and present awards to some of the most talented and tattooed, beautiful people of this industry!”