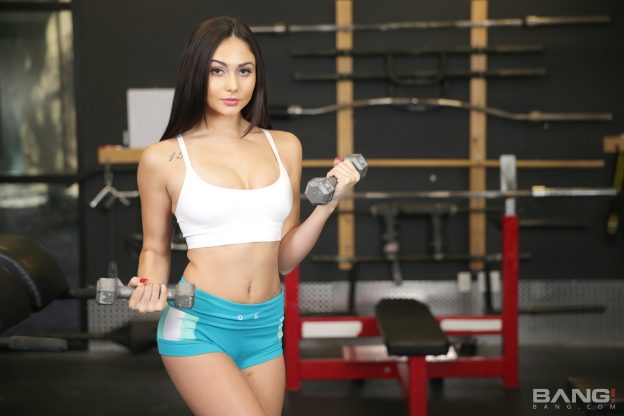 FOR IMMEDIATE RELEASE – March 8, 2018 – Cyberspace — Adult powerhouse BANG! (www.bang.com) is thrilled to announce they have named breathtaking, brunette beauty, Ariana Marie as their March Ambassador of the Month.

Superstar Ariana Marie is no stranger to being in the spotlight. Her magnificent body, natural look, and playful innocence has catapulted her to star status. Ariana shot her very first scene for Bang! Confessions recently and fans will be blown away. Bang! Confessions 4K series features sexy adult film stars confessing their dirtiest fantasies and sharing shocking real life stories.

“We were all really excited to have Ariana shooting for Bang! the minute the scenes were booked” said Clement, Co-founder and CEO of Bang.com. “As soon as our team saw the first pictures and clips from set we knew immediately we wanted Ariana as a Bang! Ambassador. Her Bang! Confession scene is so raw and people are going to be blown away by her Bang! Gonzo scene coming later this month.”

In Ariana’s exclusive Bang! Confession scene “Ariana Marie Gets Her Pussy Worked Out At The Gym”, shares the story of Ariana’s real-life fantasy come to life when an intense workout at the gym gets taken to the next level as she meets a hot bodybuilder who works her out from head to toe.

“I was very honored when Bang! asked me to be the Ambassador for March. So far I’ve shot for Bang! Confessions & Bang! Gonzo. I can’t even begin to explain the intensity of the sex during both scenes. I loved every minute of it and hope my fans enjoy it as well. I can’t wait to shoot more for Bang! and can’t thank them enough for the opportunity to represent the brand for the month of March” said Ariana.

As a special treat in celebration of Ariana being the March Ambassador of the Month, Bang! will be releasing Ariana’s second scene in their Bang! Gonzo series with Johnny Castle later this month. Fans can expect some wild, unscripted, gonzo sex between petite Ariana and hunky Johnny.