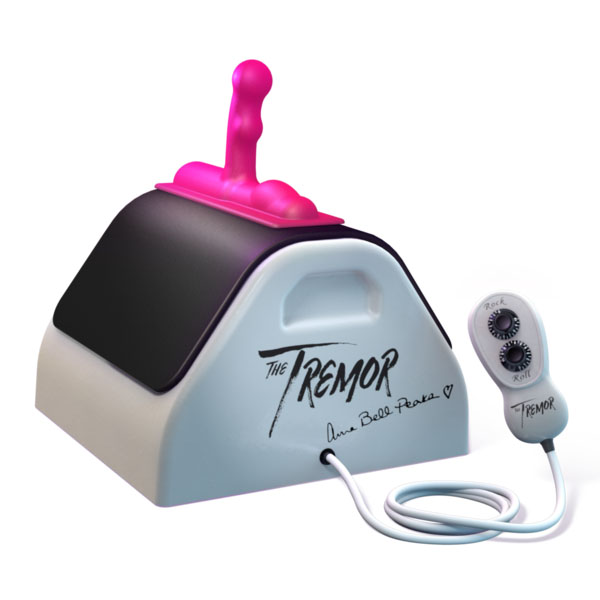 FOR IMMEDIATE RELEASE – January 24 , 2018 – Las Vegas, NV – The Tremor (www.tremorrocks.com), the Rock and Roll Sex Toy, is excited to announce its first “Signature Edition” in conjunction with adult entertainment inked superstar Anna Bell Peaks. The “Signature Edition” is on display at AVN’s Adult Entertainment Expo this week in Anna’s booth; and now available for immediate shipping.

Anna Bell Peaks was selected as the spokesmodel for Tremor after her appearance in the commercial shoot for the Tremor. Anna was also the very first person to ever experience a ride on the Tremor. Anna appeared in the Tremor booth at all three 2017 Exxxotica Expo events each with huge lines of adoring fans anxious to meet the superstar. The Tremor team collaborated with Anna Bell Peaks in the development of her Signature Edition Tremor; which features a special version of The Rockabilly silicone attachment in Anna’s trademark pink hair color; a comfort pad and a Bridge both in black silicone attachment. The Anna Bell Peaks’ “Signature Edition” has Anna’s autograph prominently emblazoned across the front of the Tremor and buyers receive an autographed photo.

“I’m excited to be returning to the show this year with my own booth filled with everything Anna Bell Peaks and to meet my existing fans and make some new ones. I’m especially excited to have my Signature Edition Tremor on display for the first time in my booth! I’ve loved every minute of working with the Tremor team and it’s truly the highlight of my career so far to see this go from a ‘Hey what about a Anna Bell Peaks version of the Tremor’ conversation to there actually being one… I’m truly blessed to be in a business I love surrounded by creative people that challenge me and help build my career.”

“The chemistry was evident from the moment we met Anna”, said Pete Housley of Naughty Business. “We had an amazing first experience with her which lead to her being The Tremor spokesmodel and eventually to the collaboration on the development of her own Signature Edition Tremor. 2017 was an amazing year for Tremor and we finished stronger than we ever expected!”

About The Tremor
The Tremor (www.tremorrocks.com) is a ride-on sex toy built from the ground up with a lightweight, white, A-frame sleek base. The Tremor has all digital controls and motors for more granular precise control. The unique, sexy, retro remote with guitar style knobs offers the user single-handed control of the “Rock” for vibration and “Roll” for rotation — so you can crank up the pleasure without distraction. The Tremor also features a removable silicone pad; which offers both comfort and easy cleaning between sessions. It also includes two high-quality silicone attachments, ‘The Bridge’ and ‘The Whammy Bar’. The Bridge is a low profile non-insertable attachment made to be used with the “Rock” vibration. The Whammy Bar is an insertable attachment with clitoral stimu-bumps that truly amplify the experience with both vibration and rotation. The Tremor retails for $799, with a 2-Year Complete Warranty and free 2 day shipping at www.tremorrocks.com. Follow The Tremor through Social Media on Facebook https://www.facebook.com/tremorrocks/, Twitter https://twitter.com/tremorrocks and Instagram https://www.instagram.com/tremorrocks/.