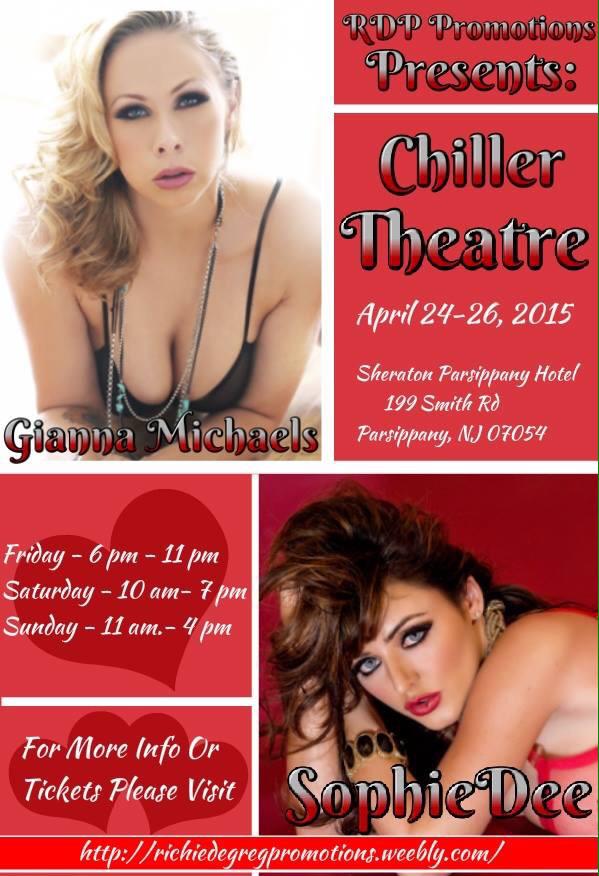 Chiller Theatre Expo is the biggest horror and goth/sci fi show on the East Coast and they are celebrating their 25 year anniversary. Gianna and Sophie will be on hand to meet guest, take photo’s and sign autographs.

Both Michaels and Dee have appeared in horror and goth/sci-fi mainstream films that garnered them an invitation to the event. Gianna had role in the 2010 Film “Piranha 3D” and appeared in “Criminal” an action short in 2014. Sophie has starred in two independent horror films, “Theater of Derange” and “Unmimely Demise” as well as several other mainstream projects.

“I am really excited to be doing Chiller Theatre Expo! It’s cool to meet fans that are into horror and sci-fi films. I hope everyone in the greater NJ area can come check out this unique event and get a little something special signed from me to take home” said Gianna Michaels.

Gianna and Sophie will be signing Friday 6-11pm, Sat 10am-7pm and Sunday 11am-4pm. Chiller Theatre Expo is being held at the Sheraton Parsippany Hotel, 199 Smith Road Parsippany, NJ. 07054. For more info and tickets you have visit their official website http://www.chillertheatre.com/.

If you are not able to make it out to meet Gianna and Sophie you can treat yourself to some merchandise from their official stores giannaxxxstore.com and www.sophiedeestore.com. To keep up with their latest adventures follow them through social media on Twitter @therealgianna and @sophiedee

TIME SENSITIVE: FOR IMMEDIATE RELEASE – March 20, 2015 – Los Angeles, CA – Superstar Sara Jay defends her Streamate/Immoral Productions March Mayhem Cock Sucking Challenge Championship title against challenger Jennifer White LIVE on Friday night in what is sure to be one of the wildest shows ever shot on Streamate.

“I am very excited to be in the finals again this year. It’s been a wild and sloppy tournament so far and I’ve got a few surprises for this match with Jennifer because I will do anything to keep my title. I’m hoping for a repeat so please be sure to watch and vote live” said Sara Jay.

Las Vegas, NV — February 18, 2015 – In a landscape dominated by multi-million dollar properties Larry’s Villa, Las Vegas’ first licensed Strip Club, seems like a venue that time forgot. Now it has a new claim to fame as it steps up and proudly claims itself ‘The Shittiest Strip Club on Earth’.

“Larry’s Villa is indomitable part of the Vegas landscape. It’s old-school. Sure there are bigger, flashier clubs in the city but none of them have the history of Larry’s.”, said Housley. “Larry’s has no interest in competing with treasured clubs with 3 million dollar chandeliers, gigantic warehouse clubs, or even zoos with rhinos — those places can have their $18 drinks served in a dixie cup size glass. We want to embrace what Larry’s Villa is; so what if we are the ‘shittiest’ strip club in Vegas? We’ve got $2 PBR drafts, great gaming, the ladies and some awesome wild events that will keep guest coming back for more. Boiled down, Larry’s is just a great unsophisticated place to party…”

A new lineup of events, some loose gaming, cheap drinks and of course the Ladies of Larry’s Villa will make any visit an unforgettable Vegas destination for locals and tourists alike. The ‘Shittiest Strip Club on Earth’ announced today some of it’s upcoming lineup of events; anchored by the signature “Midget Wrestling” just in time for St. Patrick’s Day.

Stripper Karaoke — It’s back every Wednesday! The event

that started it all; Stripper Karaoke with $250 in weekly Cash and Prizes it’s the ultimate opportunity for the uninhibited to strut their stuff singing and stripping at the same time.  Rebel Bass Karaoke KJ Big Gee makes his triumphant return to the event that he helped create. Stripper Karaoke is always a wild ride; everyone is welcome including dancers from any club in Vegas who thinks they can sing and strip to win. Wanna just watch and not sing; we’ve got you covered with $2 PBR drafts and giveaways all night.

Saturday March 14th, 2015 — Larry’s Villa, The Shittiest Strip Club on Earth, will play host to the now world famous “Half Pint Brawlers” for a St. Patrick’s day Midget Wrestling event including leader Puppet the Pyscho Dwarf in a no-holds-barred competition that only Larry’s could host.  This isn’t some frew-frew version of Midget Wrestling; no pansy rings will hold these fighters back… This is Raw Midget Wrestling and not for the timid or faint of heart.  $2 Green Beers all night, plus drink specials.